This blog is part of a series of blogs explaining the internals of signals and slots.

In this article, we will explore the mechanisms powering the Qt queued connections.

In the first part, we saw that signalsare just simple functions, whose body is generated by moc. They are just calling QMetaObject::activate, with an array of pointers to arguments on the stack.Here is the code of a signal, as generated by moc: (from part 1)

QMetaObject::activatewill then look in internal data structures to find out what are the slots connected to that signal.As seen in part 1, for each slot, the following code will be executed:

The class is thread-safe if its member functions can be called safely from multiple threads, even if all the threads use the same instance of the class. Note: Qt classes are only documented as thread-safe if they are intended to be used by multiple threads. Every thread may have its own event loop. To call a slot (or any invokablemethod) in another thread, place that call in the target thread's event loop. The short version is that I don't think it's feasible for a Model to be modified on a non-GUI thread.regardless of whether the model's data has been protected with read/write locks. If what I'm gathering is correct, then Qt should probably have an assert that a model and its view have the same thread affinity (it doesn't seem to do that now).

A QueuedConnection will post an event to the event loop to eventually be handled.

When posting an event (in QCoreApplication::postEvent),the event will be pushed in a per-thread queue(QThreadData::postEventList).The event queued is protected by a mutex, so there is no race conditions when threadspush events to another thread's event queue.

Once the event has been added to the queue, and if the receiver is living in another thread,we notify the event dispatcher of that thread by calling QAbstractEventDispatcher::wakeUp.This will wake up the dispatcher if it was sleeping while waiting for more events.If the receiver is in the same thread, the event will be processed later, as the event loop iterates.

The event will be deleted right after being processed in the thread that processes it.

An event posted using a QueuedConnection is a QMetaCallEvent. When processed, that event will call the slot the same way we call them for direct connections.All the information (slot to call, parameter values, ..) are stored inside the event.

The argv coming from the signal is an array of pointers to the arguments. The problem is that these pointers point to the stack of the signal where the arguments are. Mahjong poker chips. Once the signal returns, they will not be valid anymore. So we'll have to copy the parameter values of the function on the heap. In order to do that, we just ask QMetaType. We have seen in the QMetaType article that QMetaType::create has the ability to copy any type knowing it's QMetaType ID and a pointer to the type.

We can now put it all together and read through the code ofqueued_activate, which is called by QMetaObject::activate to prepare a Qt::QueuedConnection slot call.The code showed here has been slightly simplified and commented:

Upon reception of this event, QObject::event will set the sender and call QMetaCallEvent::placeMetaCall. That later function will dispatch just the same way asQMetaObject::activate would do it for direct connections, as seen in Part 1

It is the destructor of QMetaCallEvent which will release the semaphore. This is good becausethe event will be deleted right after it is delivered (i.e. the slot has been called) but also whenthe event is not delivered (e.g. because the receiving object was deleted). 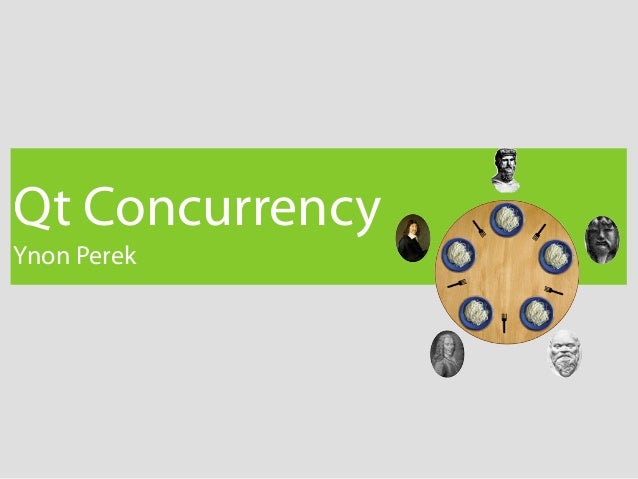 A BlockingQueuedConnection can be useful to do thread communication when you want to invoke afunction in another thread and wait for the answer before it is finished. However, it must be donewith care.

You must be careful in order to avoid deadlocks.

Obviously, if you connect two objects using BlockingQueuedConnection living on the same thread,you will deadlock immediately. You are sending an event to the sender's own thread and then are locking thethread waiting for the event to be processed. Since the thread is blocked, the event will never beprocessed and the thread will be blocked forever. Qt detects this at run time and prints a warning,but does not attempt to fix the problem for you.It has been suggested that Qt could then just do a normal DirectConnection if both objects are inthe same thread. But we choose not to because BlockingQueuedConnection is something that can only beused if you know what you are doing: You must know from which thread to what other thread theevent will be sent.

The real danger is that you must keep your design such that if in your application, you do aBlockingQueuedConnection from thread A to thread B, thread B must never wait for thread A, or you willhave a deadlock again.

When emitting the signal or calling QMetaObject::invokeMethod(), you must not have any mutex lockedthat thread B might also try locking.

A problem will typically appear when you need to terminate a thread using a BlockingQueuedConnection, for example in thispseudo code:

You cannot just call wait here because the child thread might have already emitted, or is about to emitthe signal that will wait for the parent thread, which won't go back to its event loop. All the thread cleanup information transfer must only happen withevents posted between threads, without using wait(). A better way to do it would be:

The downside is that MyOperation::cleanup() is now called asynchronously, which may complicate the design.

This article should conclude the series. I hope these articles have demystified signals and slots,and that knowing a bit how this works under the hood will help you make better use of them in yourapplications.