He's never won a major live poker tournament. He's second to last in chips to start the final table. He's too quiet to become the leading poker ambassador. No player from Sweden has ever won this tournament.

Those were all rumblings heard throughout the poker world about Martin Jacobson in the months leading up to the 2014 World Series of Poker Main Event final table. When it was all said and done, though, the man from Sweden proved to be the last player standing, topping poker's greatest event to win his first WSOP gold bracelet and the massive $10 million first-place prize.

On Monday, the November Nine returned to action. Nine players remained, led by Jorryt van Hoof, and following a long day of play that lasted until the early hours of Tuesday morning and spanned 244 hands, just three were left. One of those three was Jacobson, and you can read the recap of Monday's action by clicking here.

Joining his fellow Europeans in the final trio was Felix Stephensen. Van Hoof had the chip lead, Jacobson was in second place, and Stephensen sat third. Each player was guaranteed at least more than $3.8 million, but it was all about the top prize and poker's most prestigious title.

As fate would have it, van Hoof's chip lead wouldn't last, and the Dutchman would soon fall to the smallest stack of the three. The trio battled for 49 hands before van Hoof was sent to the rail in third place, and that happened on Hand #293 of the final table.

At the start of heads-up play, Jacobson had 142 million to Stephensen's 58.5 million. The Swede had the chip lead, he had the momentum, and he had the skills, and it seemed as though nothing was going to stop him. It proved true as he kept the pressure on his Norwegian opponent to grind Stephensen down to under 30 million in chips. Interestingly, Stephensen seemed to be winning most of the pots heads up to start, but all of the big, meaningful ones went to Jacobson.

Stephensen opened with a raise from the button, Jacobson moved all in, and Stephensen called with the . While a medium suited ace isn't a bad hand to go with when in the position Stephensen was in, Jacobson had a powerhouse with the .

The flop delivered Jacobson with top set of tens and really gave him a stranglehold on the hand. The turn was the to leave Stephensen drawing dead. Jacobson's supporters began to rush the stage as the dealer completed the board with the to make it official.

With that, Martin Jacobson was crowned the champion of the world's greatest poker event — he secured his first major live poker tournament victory, and it proved to be the biggest and baddest of them all. Since Joe Cada in 2009, no player had gone from beginning chip leader of the event to champion, but Jacobson did so after finishing on top of the counts way back on Day 1a. 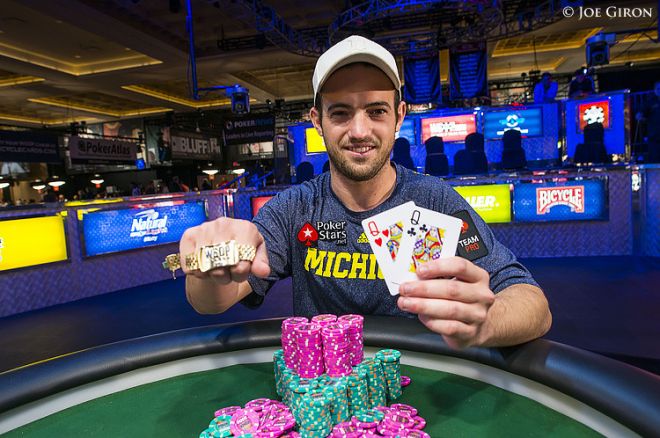 Congratulations to Jacobson on winning the 2014 WSOP Main Event and cementing himself in the poker history books!

Remember last year during the World Series of Poker main event when this guy’s reaction made us think he’d lost the saddest poker hand ever? Erase that from your memory.

This hand right here — from the WSOP Big One for One Drop, which aired Tuesday night on ESPN — is without a doubt the worst bad beat in the history of poker.

Let’s start with this crazy fact: These guys paid $1 million(!) to play in a poker tournament, the only tournament of its kind with $15,306,688 to the winner (let that sink in for a moment).

Both Connor Drinan and Cary Katz picked up pocket aces, and after some pre-flop raises and acting that included an ominous message from Katz, they naturally got their money all in, but only Drinan was at risk of being eliminated. But, c’mon, what’s the worst that could happen when they’re an identical 2% to win a pot they split 98% of the time?

Aces vs. aces. No big deal?

That look you get when you know you can’t lose.

Flush draw. No, this isn’t happening …

This guy can’t believe it either!

That look you get when you realize $1 million was just flushed away on an awful beat.

Longtime ESPN poker commentator Lon McEachern called Drinan losing to an improbable flush “the worst beat in the history of tournament poker.” How can anybody disagree given the enormous stakes?

Oh, and that ominous message from Katz to Drinan before the flop? “Save your money, kid. You can’t win every pot.”

Drinan was knocked out in 18th place and out of the money.

To watch this horrific beat slowly unfold, just click below: